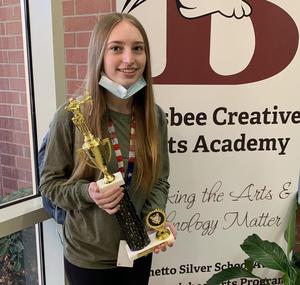 WEST COLUMBIA, SC -- Elizabeth Pittman got a surprise during one of her lunch periods earlier this week.

The eighth-grader at Busbee Creative Arts Academy got a FaceTime call from the school’s archery coach Robin Gerzema, to share the season’s latest rankings from the National Archery in the Schools Program (NASP).  Elizabeth is not only ranked No. 1 in South Carolina among 111 middle school girls archery competitors, Gerzema said, but she is ranked at No. 3 in the United States among nearly 4,000 rated middle school girls.

Elizabeth’s interest in the sport started as a student at Saluda River Academy for the Arts. Brookland-Cayce High also has an archery team, and Elizabeth plans to continue her sport there.

Elizabeth devotes a lot of her free time to practice, according to her coach, whether it’s at school or in the hallways of her home.

“Typically, Elizabeth is the first one at training and the last one to leave,” Gerzema said. That dedication is paying off, as Elizabeth recently shot a personal best of 293. For context, the current top-ranked archer among middle school girls in the United States has a score of 294.

Gerzema expects Elizabeth to have continued strong showings as events wind down for the school year in late spring.

“She demonstrates true sportsmanship with her teammates and is always encouraging,” Gerzema said.